Can Chromebooks Shine for System Builders? 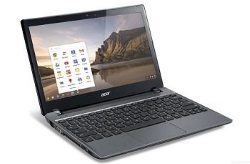 Channel players weigh in on the pros and cons of making the low-cost devices part of their service offerings.

There's money to be made in Chromebooks, computers that run Google's Chrome operating system. To get a share of those proceeds, however, system builders will have to tap into the right markets with the right mix of bundled services.

Some companies are making money now on Chromebooks. Take Minneapolis-based Agosto Inc. The Google Apps and cloud consulting company is doing well with the PC alternative, according to CEO Aric Bandy. "We have sold a ton of Chromebooks. This year we'll probably sell 5.5 million," he says.

That number represents a fourfold increase over the previous year, and Bandy expects strong growth to continue. He says the devices sell because of low cost, ease of management, and inherent security. With regard to the latter, since nothing is stored on a device, losing one doesn't create a security breach.

So who's buying? A typical user is someone who needs to connect to corporate or other infrastructure but doesn't need a full desktop, says Bandy. Education, for example, has been a strong market for Agosto. Other vertical markets where Chromebooks are a good fit are retail and corporate point-of-use kiosks.

Unlike some systems that custom builders provide to their customers, Chromebooks cannot simply be sold as hardware, says Bandy. Instead, they need to be part of a broader service offering that includes, say, access to cloud-based applications or customer relationship management software.

"Where we see [the Chromebook] being successfully positioned and sold to our customers is where it is positioned as a gateway device," Bandy says. So Agosto sells the hardware, the Google Apps suite, cloud services, and the integration of them all.

I’ve been meaning to let you know how much I appreciate Dan. He’s done a great job for us. Dan communicates and explains a problem in terms I can understand, no tech jibber jabbers. I really appreciate the fact that he understands how time is of the essence and was quick in finding the cause END_OF_DOCUMENT_TOKEN_TO_BE_REPLACED

OTHER SIDE OF THE COIN

Not everyone paints a happy Chromebook picture, however. The systems have been out for several years, and some estimate that their market share is less than 1 percent. "Google isn't providing much in the way of hard sales data, but from what I can tell, Chromebooks aren't exactly setting the world on fire, sales-wise," says Dan Olds, principal with Gabriel Consulting Group Inc.

One reason for this apparent lack of enthusiasm is that the systems are cheaper than laptops but more expensive than tablets, and they don't offer a lot more functionality, according to Olds. Even so, it may be possible for system builders to develop a market for Chromebooks, by customizing them to meet the specific requirements of organizations that need a lot of devices. Like Bandy, Olds says schools are a good example of such a customer.

Customers aren't exactly clamoring for the devices, either. "We don't have too much interest that's coming across the wire right now for them," says John Kistler, president and CEO of system builder J&B Technologies of Maryland Heights, Mo. Although Kistler says that for some potential customers, Chromebooks' low cost, ease of maintenance, and small size aren't enough to make up for their lack of power, he believes there is a market for the devices: customers who like Google Apps.

Kistler also estimates that the total market of possible Chromebook users may be less than 10 percent of the PC market as a whole. If that proves true, Chromebooks might be a market worth pursuing-that is, if one big hurdle can be overcome.

In agreement is Joshua Liberman, president of system builder Net Sciences Inc. of Albuquerque, N.M. The company's home city has a population of more than half a million, yet Liberman says that for 80 percent of it there is no true broadband option other than an expensive and difficult-to-obtain T1 line. And the situation is not uncommon, he adds.

Consequently, Liberman says, "Here in New Mexico and in much of the U.S. outside of the major metropolitan areas, bandwidth is scarce, pricey, and far from reliable. A device that works only when Internet connected makes little sense."